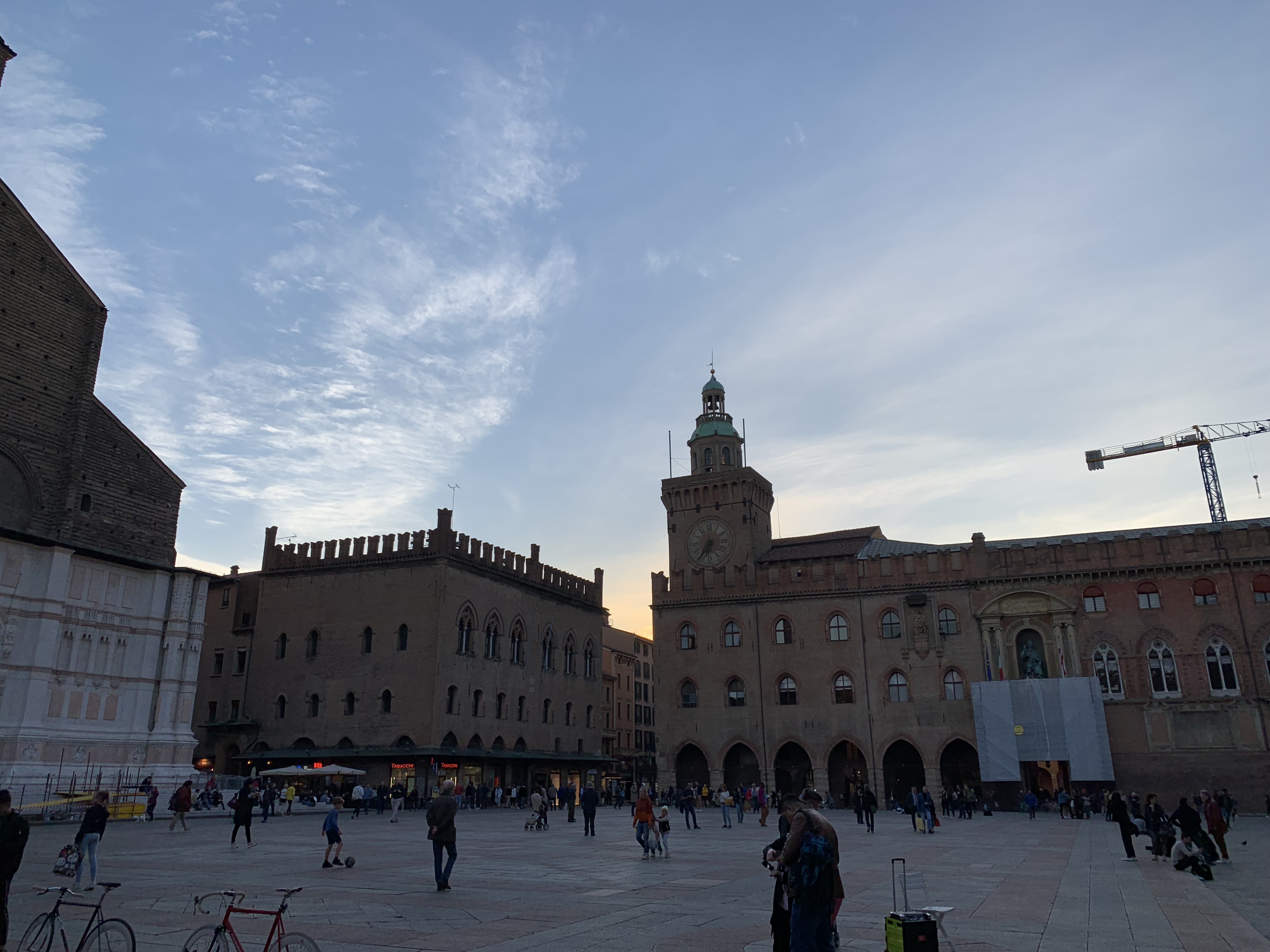 Today began far slower than yesterday, but after waking up at 5:00, and forcing myself back to sleep after a couple of hours, I rolled out of bed at around 10:00. I helped my aunt Christina prepare lunch, a squash and onion risotto (just as amazing as yesterday’s dinner) while we loosely planned the rest of the day.

After lunch, Christina convinced me to drive a macchinino a little closer to the downtown area of Bologna. It was described to me as a sort of golf-cart type of vehicle with very little power, intended for student drivers. Thankfully it was an automatic (I am terrible with stick) but I’d say it came a little closer to a diesel lawn-mower with a fairly nice carapace. Pedal to the metal, this thing struggled to get us up to 50km/h… it took several seconds before we broke 40, and that was going downhill. I don’t even remember seeing 100km/h on the dashboard.   Well, it turns out I can barely drive these things, even without multiple gears to worry about. I’m most likely going to vouch for walking most future trips.  Once we parked in a motorcycle spot (macchinino are tiny enough that they are allowed to do this) we walked into downtown Bologna. After making our way to Le Due Torri (“The Two Towers, one of which settled at an angle, and was partially disassembled for safety) we crossed the street to grab some gelato. This time I went for a combination of vanilla-with-cherries and a chocolate-with-whole-hazelnuts (called “Kiss”, for some reason) and it was pretty excellent. 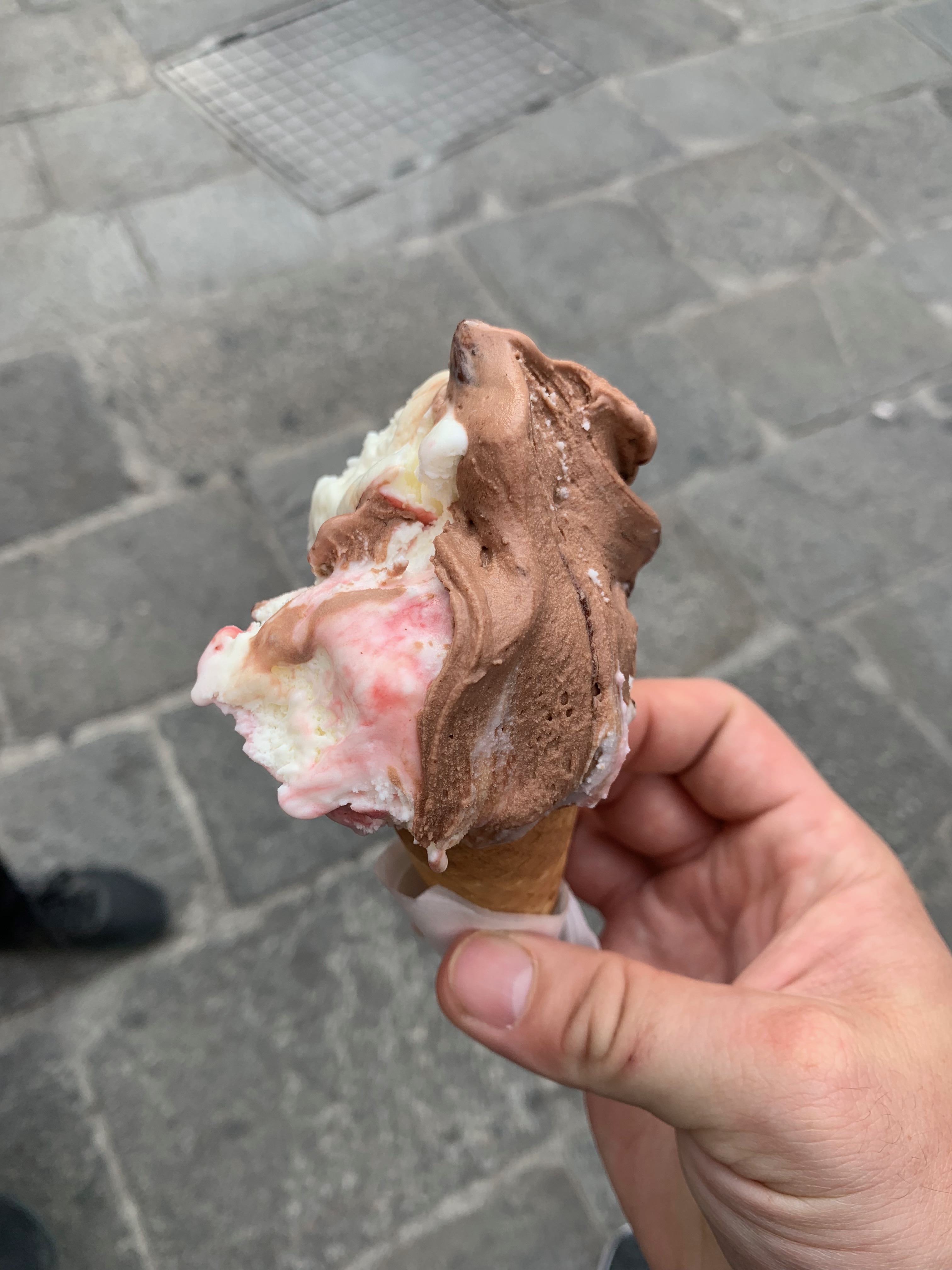 On the way into the gelato shop, I realized I wasn’t able to browse the web on my phone. This was odd because we had tested the new SIM card last night and, after a minor hiccough, everything seemed to be working fine. As it turns out, part of the activation process for iPhones involves transmitting an SMS message, which my temporary cellular plan was not pre-paid for. This activation SMS immediately placed a €0.09 charge on my account, which brought my pre-paid account balance into the negative, and invalidated my service. Thankfully I realized the problem right as we neared an authorized cellular shop, and we got everything sorted out pretty quickly.

Pro-tip for iPhone users traveling abroad: verify you can send at least one SMS with whatever pre-paid plan you set yourself up with when making the initial purchase.

After sorting out my cellular situation by giving said authorized cellular dealer the minimum of €2, my aunt and I set off for an absolutely necessary stop: the Apple Store. I didn’t really need anything, but I have made it a personal sub-quest to visit any Apple Store I come across in my travels. I ended up buying a 12W adapter, primarily for the European-outlet-compatible duck head. 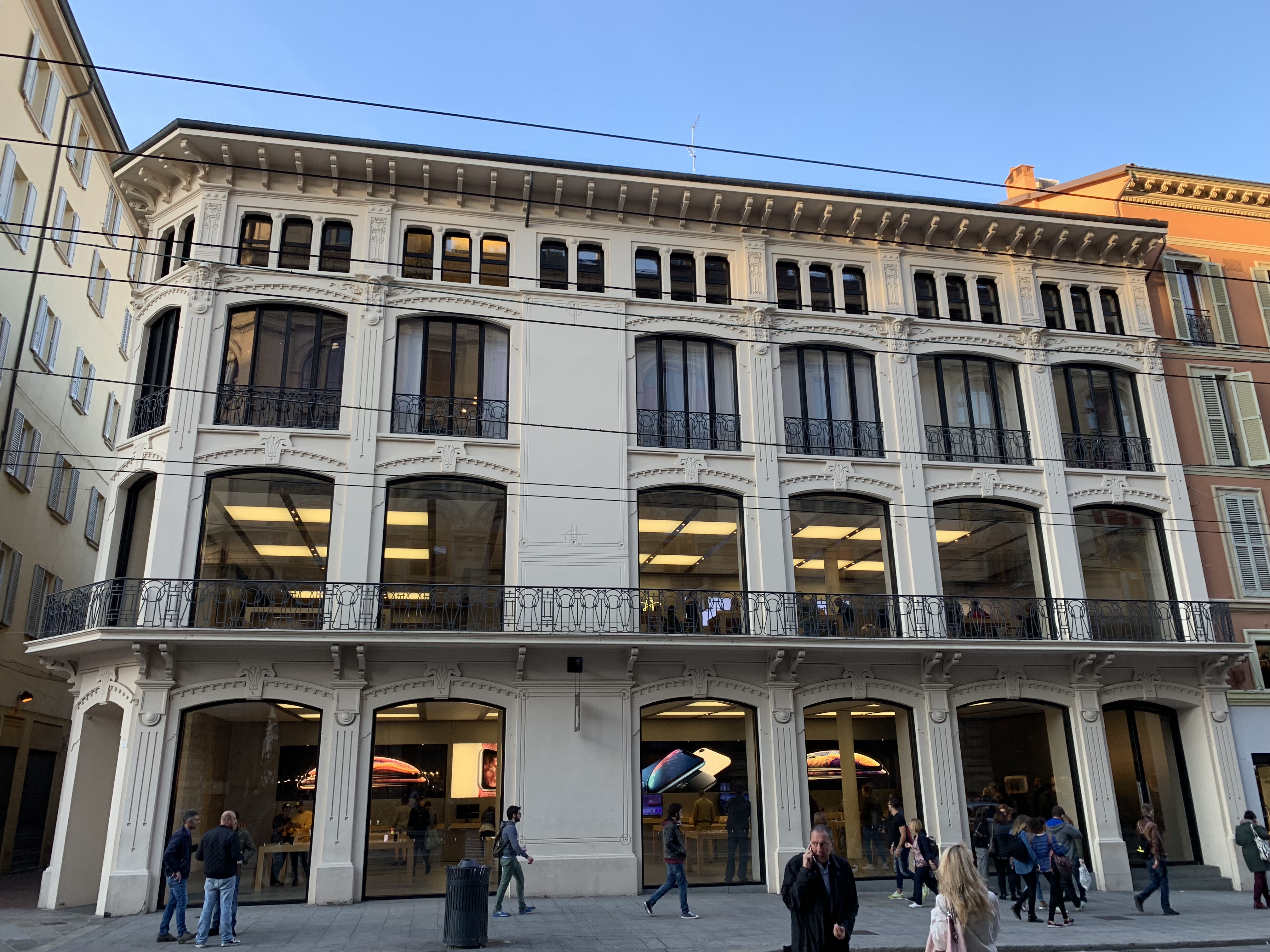 Next we bought a small bag of roasted chestnuts from a street vendor, and ate them on our way to the Fountain of Neptune and La Piazza Magiorre. From there, we wound our way through narrow side-streets back to the Viale, the main road encircling downtown Bologna. Dozens of small, bustling markets and shops lined the path on either side, showcasing fresh cheeses, meats, fish, and pastas. 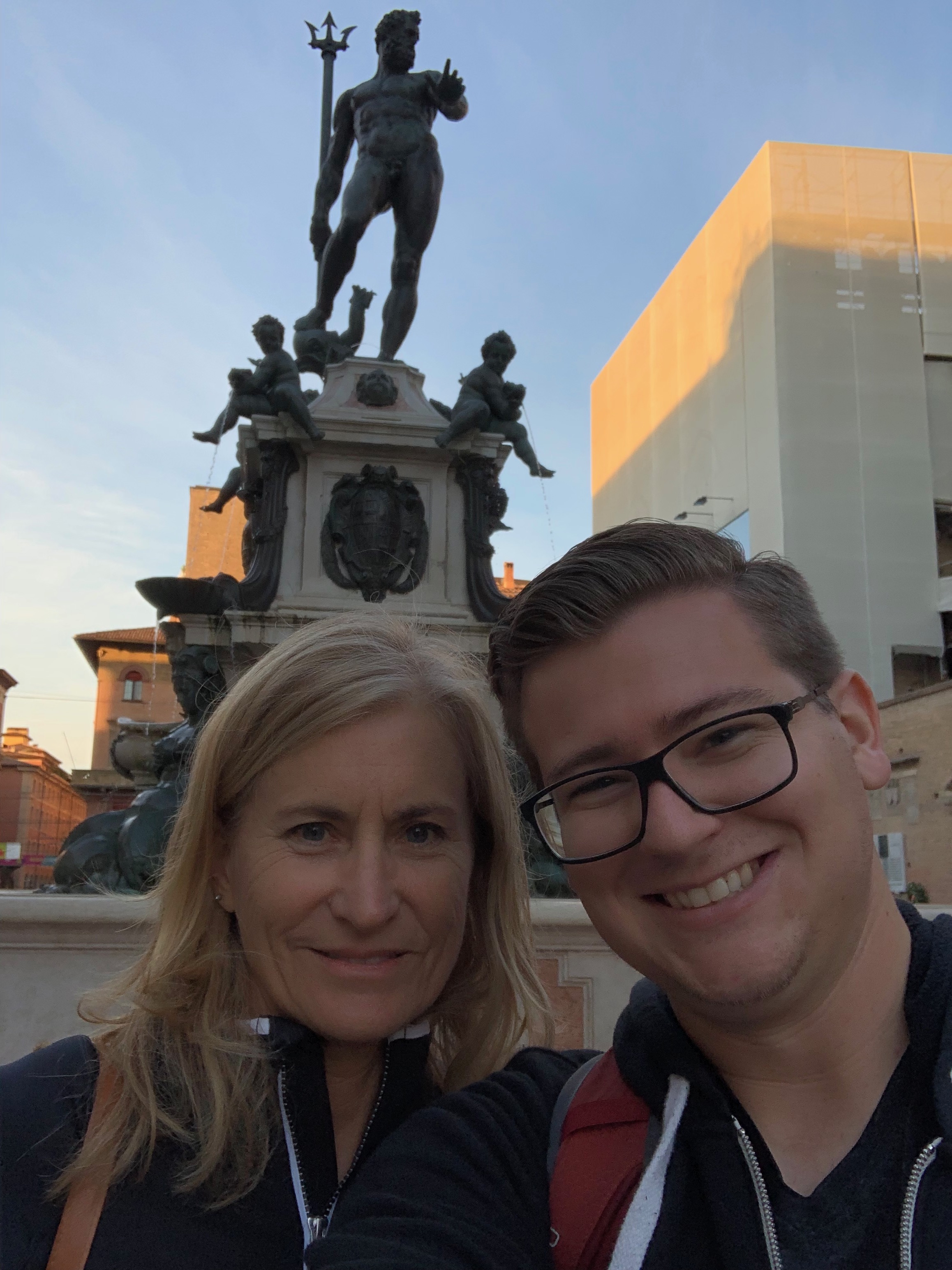 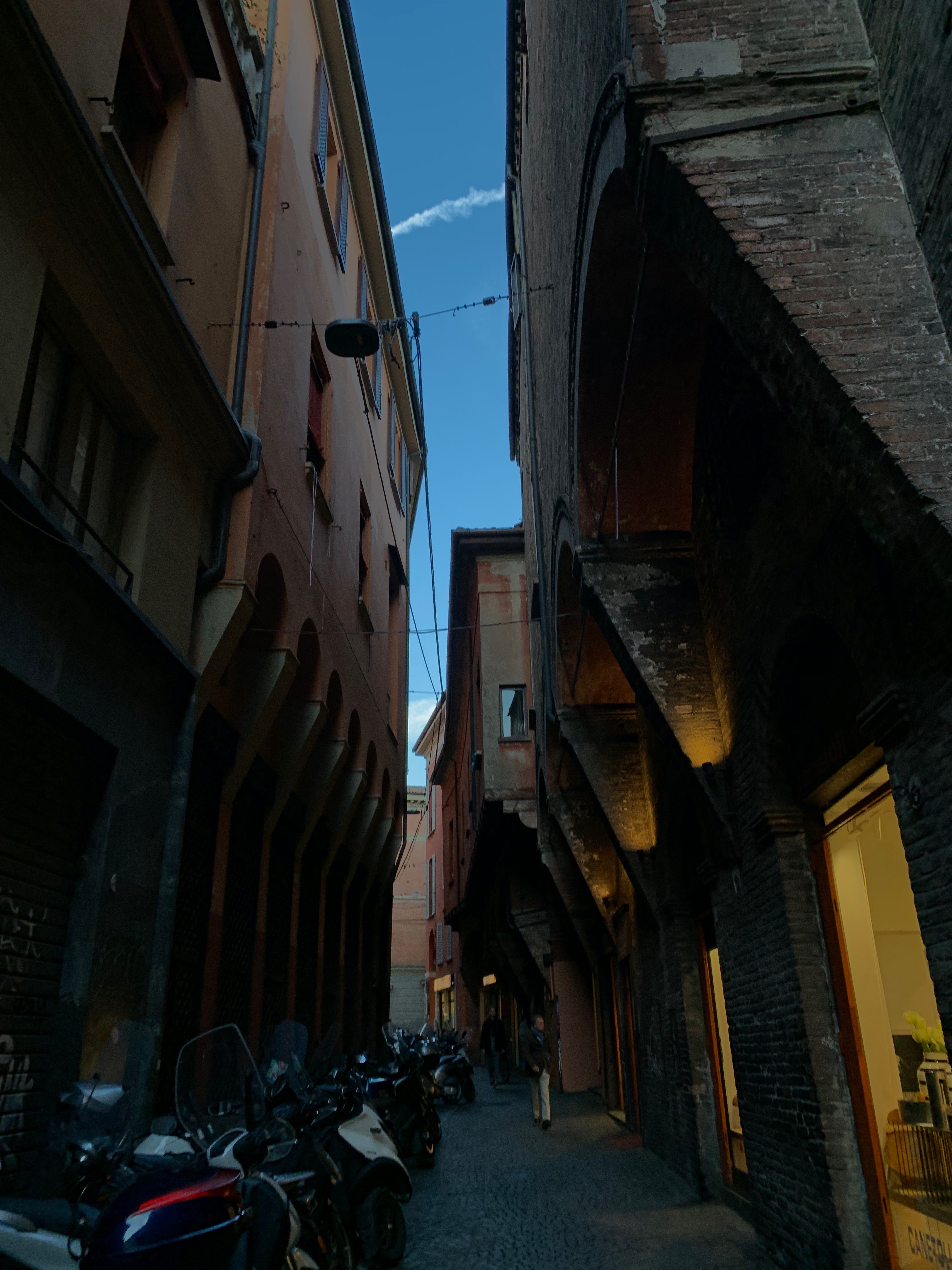 When we reached the Viale, my aunt and I parted ways and I met up with a daughter of a friend hers for aperitivo (a sort of pre-dinner appetizer, typically involving a glass of wine or spritz) where we discussed and compared Italian and American school systems, politics, and cultural norms. It was pretty cool to talk about that sort of stuff with someone my age. I look forward to more, similar encounters in the future, with friends new and old. 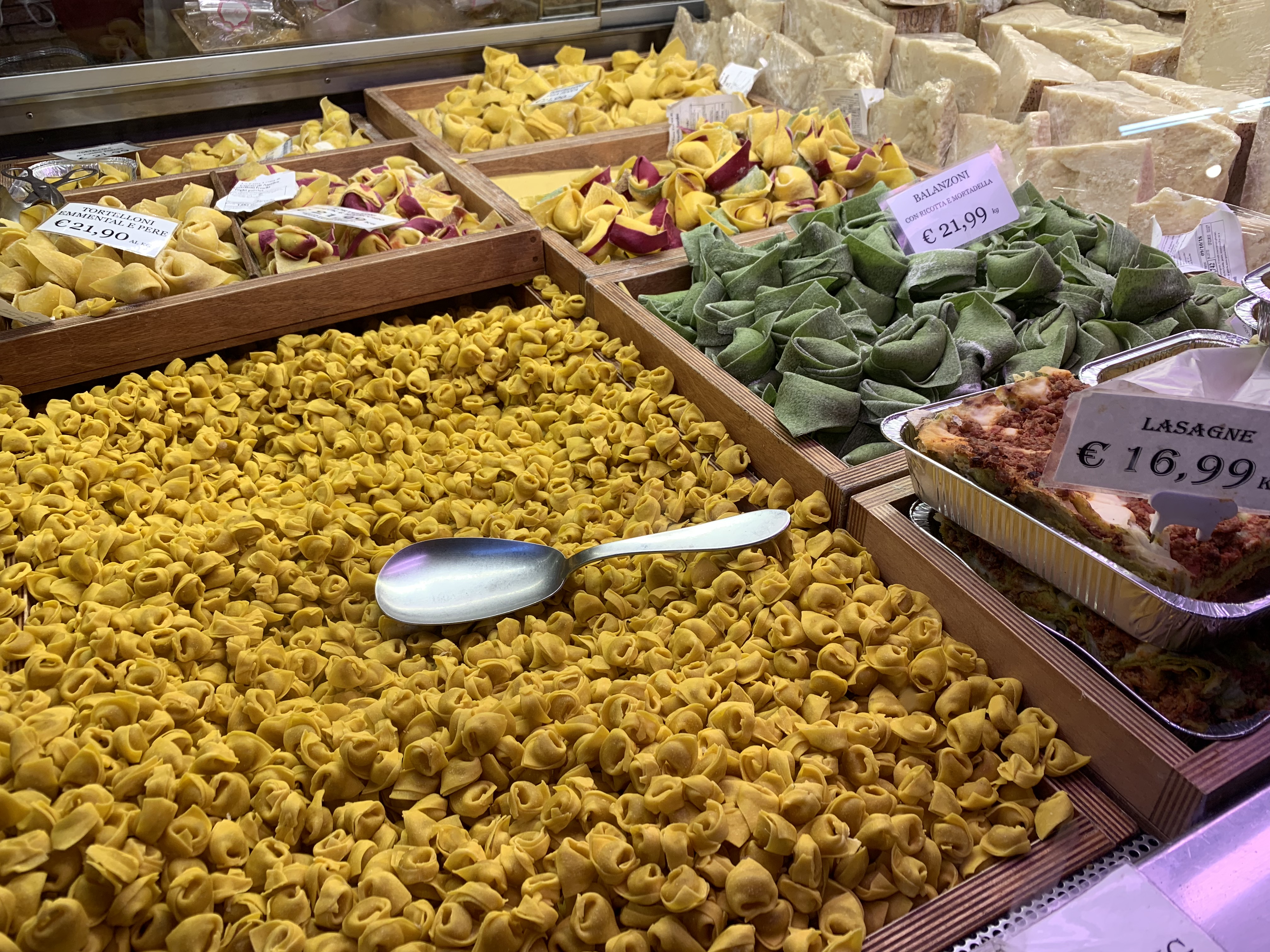